One-liners | Page 14 | PCSPECIALIST
Menu
Log in
Register
You are using an out of date browser. It may not display this or other websites correctly.
You should upgrade or use an alternative browser.

Moderator
My brother just threw a pint of milk and a block of cheese at me. How dairy.

Moderator
A woman gets on a bus with her baby. The bus driver says, 'That’s the ugliest baby that I’ve ever seen.'

The woman goes to the rear of the bus and sits down, fuming. She says to a man next to her, 'The driver just insulted me!'

The man says, 'You go right back up there and tell him off, I’ll hold your monkey for you.'

Moderator
Did you hear about those two blokes who stole a calendar? They each got six months.

"Maybe if we start telling people the brain is an app they will start using it".

when is a genius not a genius?

when they work at an apple store

enduser said:
when is a genius not a genius?

when they work at an apple store
Click to expand...

"a couple were living together for five yrs, One day the girlfriend is in the kitchen and on top of the fridge she finds $10000 and four eggs. She is baffled by what the money and eggs would be doing there, so she goes and asks her boyfriend about it. “Hey baby, why is there $10000 and four eggs on the fridge?” Her finding it jolted him. “Oh. Well, every time that you yell at me or are rude to me, I put an egg atop the refrigerator,” He replies to her. She suddenly felt mollified. “Aww baby, it’s been 5 years and you’ve only put four eggs up?”

"The other day, my wife asked me to pass her lipstick but I accidentally passed her a glue stick. She still isn't talking to me."

Moderator
My wife, who is a blonde, was moaning the other day that at work they never allowed her tea breaks. I had to explain that was because it took too long to retrain her afterwards.... 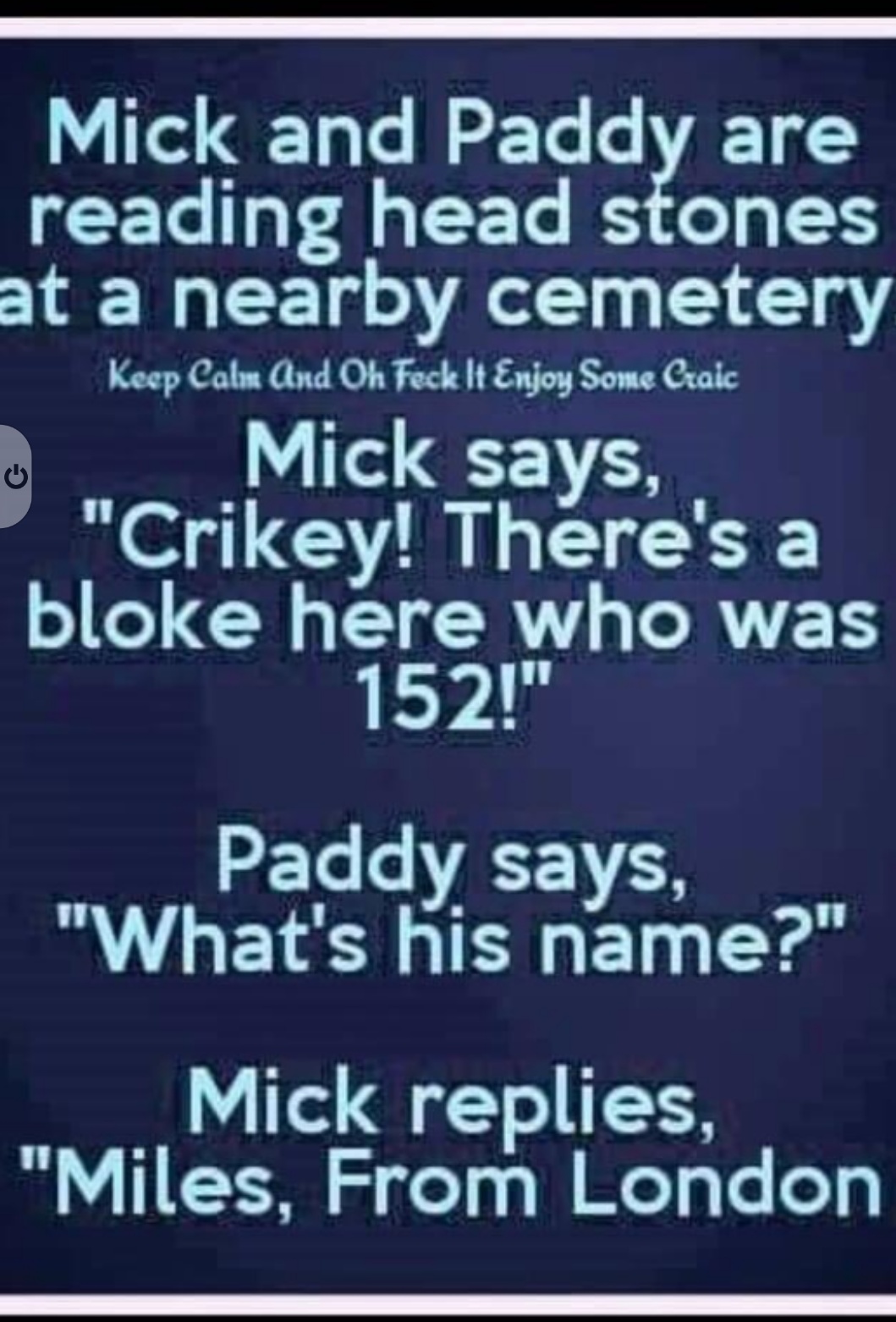 Moderator
An elderly man lay dying in his bed.

While suffering the agonies of impending death, he suddenly smelled the aroma of his favourite scones wafting up the stairs.

He gathered his remaining strength and lifted himself from the bed. Leaning on the wall, he slowly made his way out of the bedroom, and with even greater effort, gripping the railing with both hands, he crawled downstairs.

With laboured breath, he leaned against the doorframe, gazing into the kitchen. Were it not for death's agony, he would have thought himself already in heaven, for there, spread out upon the kitchen table were literally hundreds of his favourite scones.

Was it heaven? Or was it one final act of love from his devoted Irish wife of sixty years, seeing to it that he left this world a happy man?

Mustering one great final effort, he threw himself towards the table, landing on his knees in rumpled posture. His aged and withered hand trembled towards a scone at the edge of the table, when it was suddenly smacked by his wife with a wooden spoon.

An Irish lad playing golf with his regular partners was standing on the 6th tee about to tee off when a hearse and cortège rolled by on the nearby road. He stood back from his ball and blessed himself.

“Jaysus Paddy” says one of his mates. “I didn’t know you were religious?”

“Ah it’s just out of respect” he says. “We were married for 35 years after all.”

The Grim Reaper came for me last night, and I beat him off with a vacuum cleaner. Talk about Dyson with death.

"Today is Billy’s 8th birthday. To celebrate, he and his dad went to McDonalds for dinner. When they arrived, they waited in line behind a large, fat man.
Billy, not being knowledgeable about social norms, says to his dad, “Look daddy! That man’s sooooo fat! Look at him!”
Billy’s dad tells him that what he said was very rude, and if he said anything similar then they would go home. The fat man doesn’t notice, and continues waiting in line.
Suddenly, the phone in the fat man’s pocket starts beeping. Billy, now suddenly very scared, walks to the side. When Billy’s dad asks him what he’s doing, Billy says:

"In space, two aliens are talking to each other.

The second alien asks, "Are they an emerging intelligence?"