we had more and more questions about the new Update that Microsoft seems to force people to install. I did it at home on my own laptop and had no audio, some customer mentioned error messages in regards to IRST and another customer I talked to is having Adobe issues and crashes since updating.
Therefore, please be advised to at least do a full backup on an EXTERNAL device before you want to go ahead with the update. So far, the only thing that seems to help is a fresh install of Windows directly with the 1903 version, which means a wipe of your C: drive and could mean potential data loss.

This is not an official statement from PCS and we haven't heard back from MS directly, just a friendly nudge to avoid it for a bit.

Moderator
The update-in-place process should work for all users. But it doesn't and it never has - with any version of Windows. The problem I suspect is the enormous variety of hardware and software that Windows users run, which makes it very hard for Microsoft to produce an update process that works well in all circumstances.

The unfortunate fact is that many users run into strange and niggly problems that can take days or weeks to resolve. That's been the case across all versions of Windows ever since they created the update-in-place process.

They key objective of installing a new version of Windows is to end up with a stable and reliable system. The only way to be sure of meeting that objective is via a clean install. An upgrade-in-place might work for you, then again it might create stability, reliability, or usability problems that are a nightmare to troubleshoot.

You will lose data with a clean install, but the wise user already has a regular backup plan in place. You will also have to reinstall all your third party programs and reapply all the configuration options you prefer. That can take a day or two until you get good at it, but after a few reinstalls you can do a full reinstall and be back running in a day in most cases.

There are other benefits in a regular reinstall, it removes all traces of installed and later uninstalled programs, old config files, and useless data wasting your disk space. It removes any chance of improperly or incompletely uninstalled programs or drivers causing you problems later. In addition, if your system drive is an HDD, because a new installation makes the most optimal use of disk space your system will run much faster.

By all means try an upgrade-in-place but the moment you run into any problems stop and do a clean install.

You'll be glad you did.

Windows update intel RST fix (NON-RAID only)
Hi guys,
Most of you are aware of the recent issues with updating systems to 1903 and you’ve likely come across the below screenshot a couple of times. we have found a really quick fix to this but before trying this on your own system ensure that RAID is not enabled and that you haven’t set up RAID yourself. 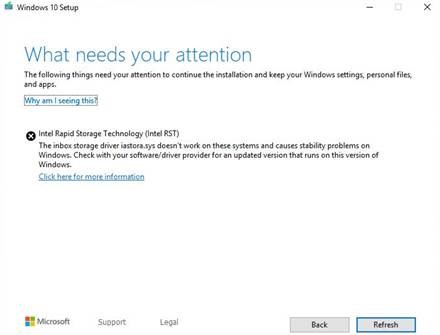 To fix this issue please follow the steps below.

Inside the folder locate iaStorA.sys, rename this file to iaStorA.sys.old and accept changes on screen.

Step 4
Rescan windows updates to continue with the update, it should now go past 25% and complete.

This is partially successful and it looks like MS have updated the update assistant to stop bypassing of the Intel RST error.
F

1. I'm pretty sure RAID is not enabled - but how do I check?
2. Not sure what you mean by 'MS have updated the update assistant to stop bypassing of the Intel RST error'. Do you mean it should no longer be blocking the update? Oh, do you mean your steps 2+3 update the update assistant - so that it then installs 1903? But we shouldn't do that if RAID is enabled?
Sorry for being thick.
Thanks
F

If you don't know whether you are using RAID, the chances are you're not.
F

It's difficult to know the purpose of the forum if it is not to help.
My questions were only a follow-on from the previous contribution.
However, I apologise profusely if I misunderstood.

It's difficult to know the purpose of the forum if it is not to help.
My questions were only a follow-on from the previous contribution.
However, I apologise profusely if I misunderstood.
Click to expand...

I think Oussebon's suggestion was purely that in this instance, it would be best to contact PCS directly as they don't monitor the forums and you'd be quicker to phone them as it's not something the forum dwellers can really help with.