Warning this review has quite a bit of blurb!

I've been looking for a new laptop to replace my existing Asus Zenbook U500VZ which has been my programming, gaming and general workhorse since 2013.

The Asus has been a very good laptop and been repaired with new M.2 SSDs which needed conversion plates as the originals are bespoke 6+12 pin sandisks (one disk died and went read only). I've also replaced the offboard usb / audio jack chip, the battery and repaired a broken standoff causing overheating of the GPU due to a bodged warranty repair, its seen better days but still plodding on.

The main specs needed to replace this laptop for me were:

2 or more storage slots - originally this laptop had 2x 128GB SSDs however space was always a major issue as I used one for Windows and the second for my Linux programming environment.

32GB of RAM - currently the 8GB is not enough on a daily basis, after opening NetBeans, DBeaver, running up a few different environments, chrome with the compulsory tabs of memory hogging doom, slack, discord etc i'm already swapping like crazy (which kills SSDs very quickly), so would a new laptop with 16GB cut it? for a month or two maybe? At work we also have a java webapp to run and a lot of the work is excel or SQL reporting based which can be very memory intensive.

A better GPU - I mostly play older games these days with the exception of EVE Online with multiple characters logged in at the same time. Playing with more than one character logged in the graphics on the Asus had to be scaled down to "Potato mode" which isn't much fun on the eyes.

After having to source a charger and battery for the last laptop, a requirement was also good supply of spares. The spares for my old laptop were very hard to come by at the time I needed them. Replacements are now readily available but the laptop is aging.

The last requirement was being able to hook up two additional screens, the Asus has a HDMI and bespoke mini DP which came with a VGA adapter. I use two external monitors and the laptop screen as a third at work, a very handy setup.

After looking for a good few months at laptops ranging from £1000 to over £3000 my view was very much along the lines of: i'm paying a couple of thousand pound for a new laptop that has 8GB more RAM which isn't going to future proof for long. Most models only come with 16GB and warranties are quickly voided by opening any of the thinner models.

Then remembering a few programming colleagues from the software house I used to work at bought desktops from PC Specialist a few years back, I had a look on here. After a few more weeks of looking through specs / chassis and combinations of configurations I settled on the 15.6" Recoil III RTX. I could have settled with the GTX butttt....

Being an expensive bit of kit I put most of the money towards it with my partner and family contributing as a birthday present, which meant when the laptop arrived it got promptly re-boxed and wrapped up for a WHOLE WEEK!

Dispatch and Build Time:
PC Specialist managed to build and dispatch within 4 working days, however I'd chosen a dedicated Saturday delivery as I wanted to make sure we were at home waiting for this one. Technically could have had this laptop by Friday, so 5 stars on this section and a great start to my experience as a customer.

First unboxing:
On inspection of the device I noted one small issue, instead of an X key on the keyboard I had two Z keys next to each other. Knowing they build these and it's a mechanical keyboard requiring the keys to be manually pushed on, quite an easy mistake to make. One quick call to the customer service line and an X key was sent out on next day delivery. So far a great experience on the aftercare side. 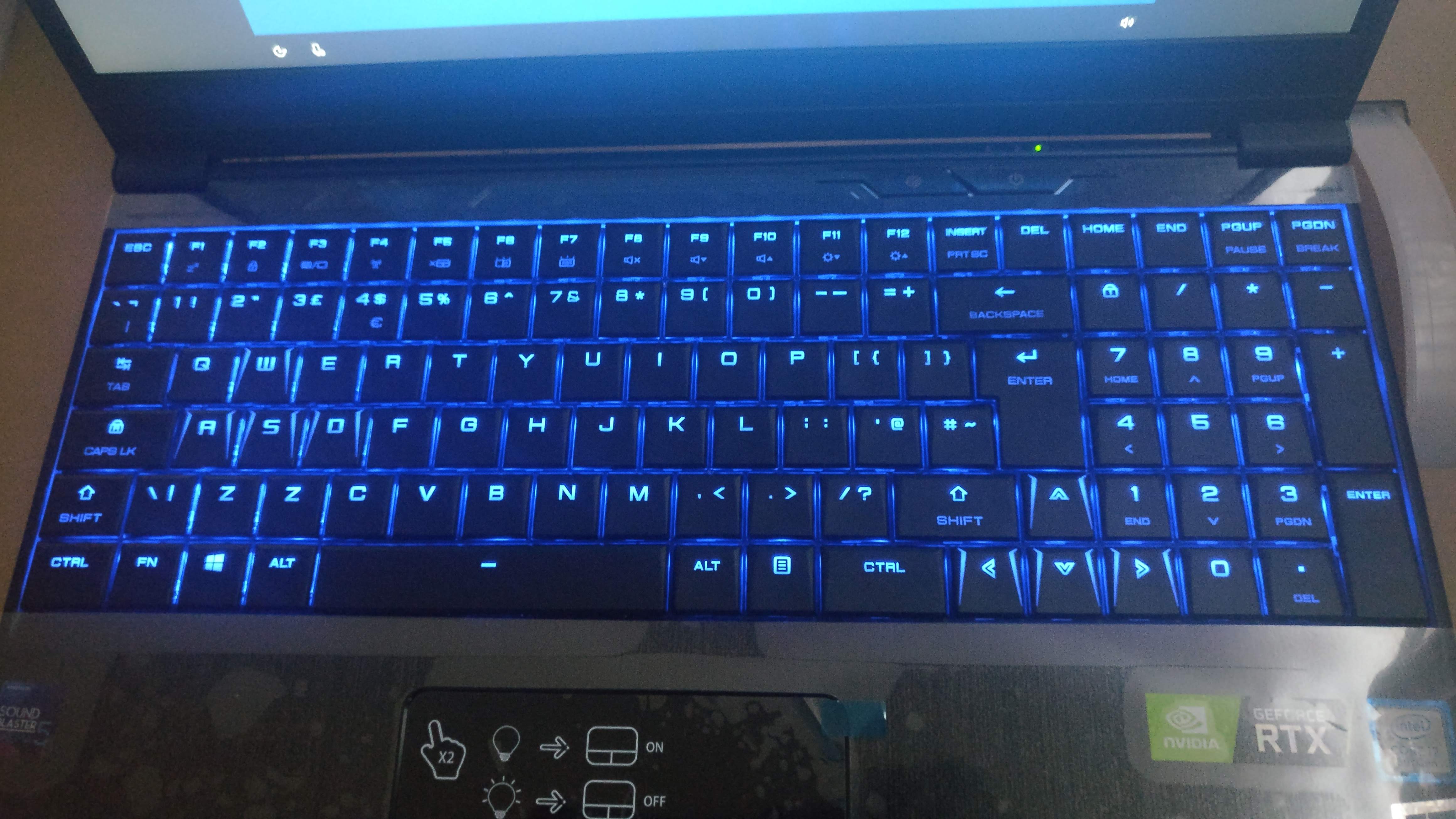 At this point I setup a basic windows user account and ran a few programs to make sure everything else looked to be working before it got reboxed for my birthday... enter one week of waiting...

Second unboxing:
After opening on my birthday and starting to setup I noticed one case screw missing near the power jack, another quick call to customer services and a case screw was sent out for me. Again no hassle and great aftercare. 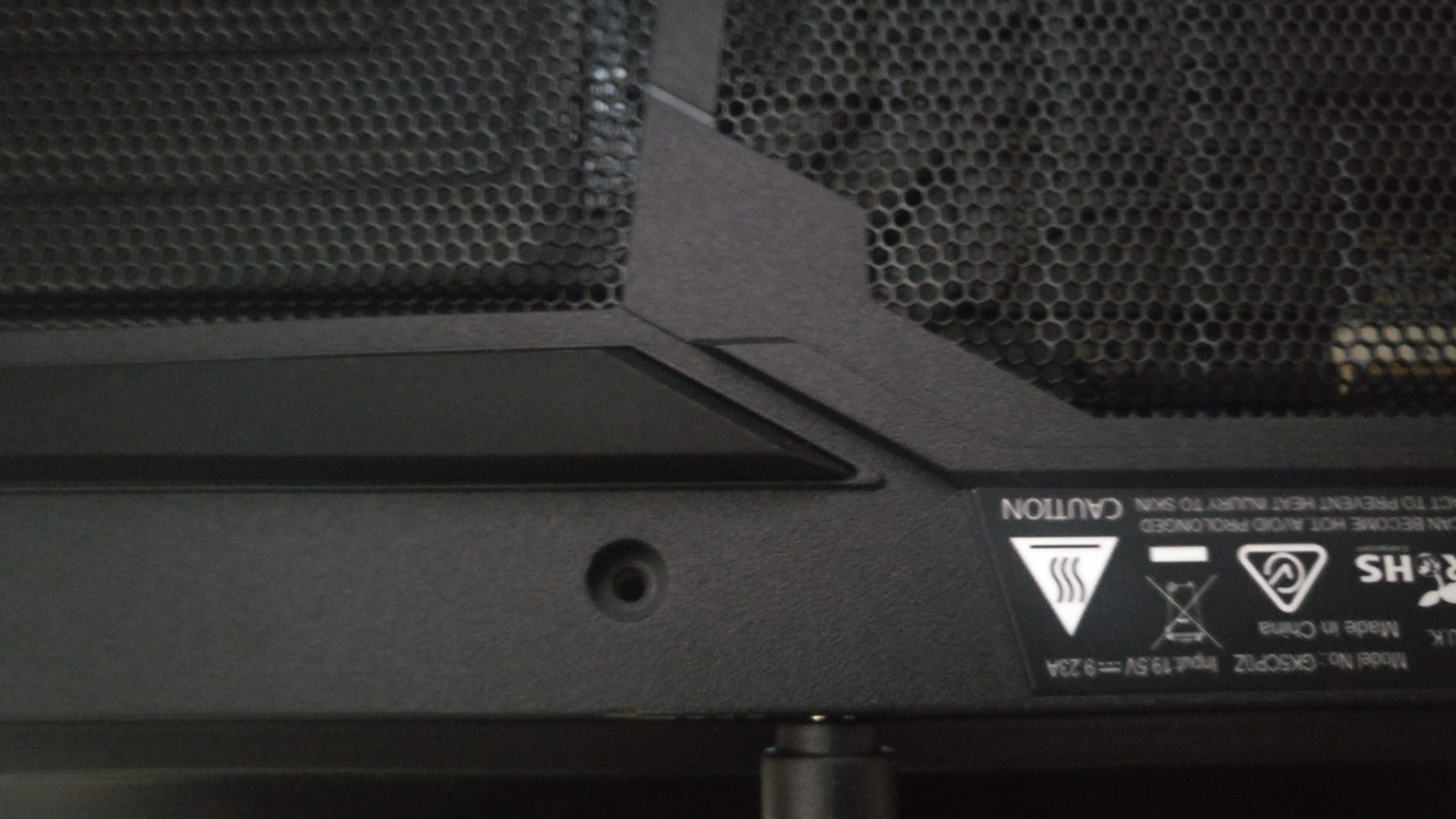 General review:
Build quality looks great, keyboard is very nice to use, tiny bit of key wiggle but nothing to worry about. To be completely honest i was worried about the keyboard after reading another review but its very nice to type and program on. 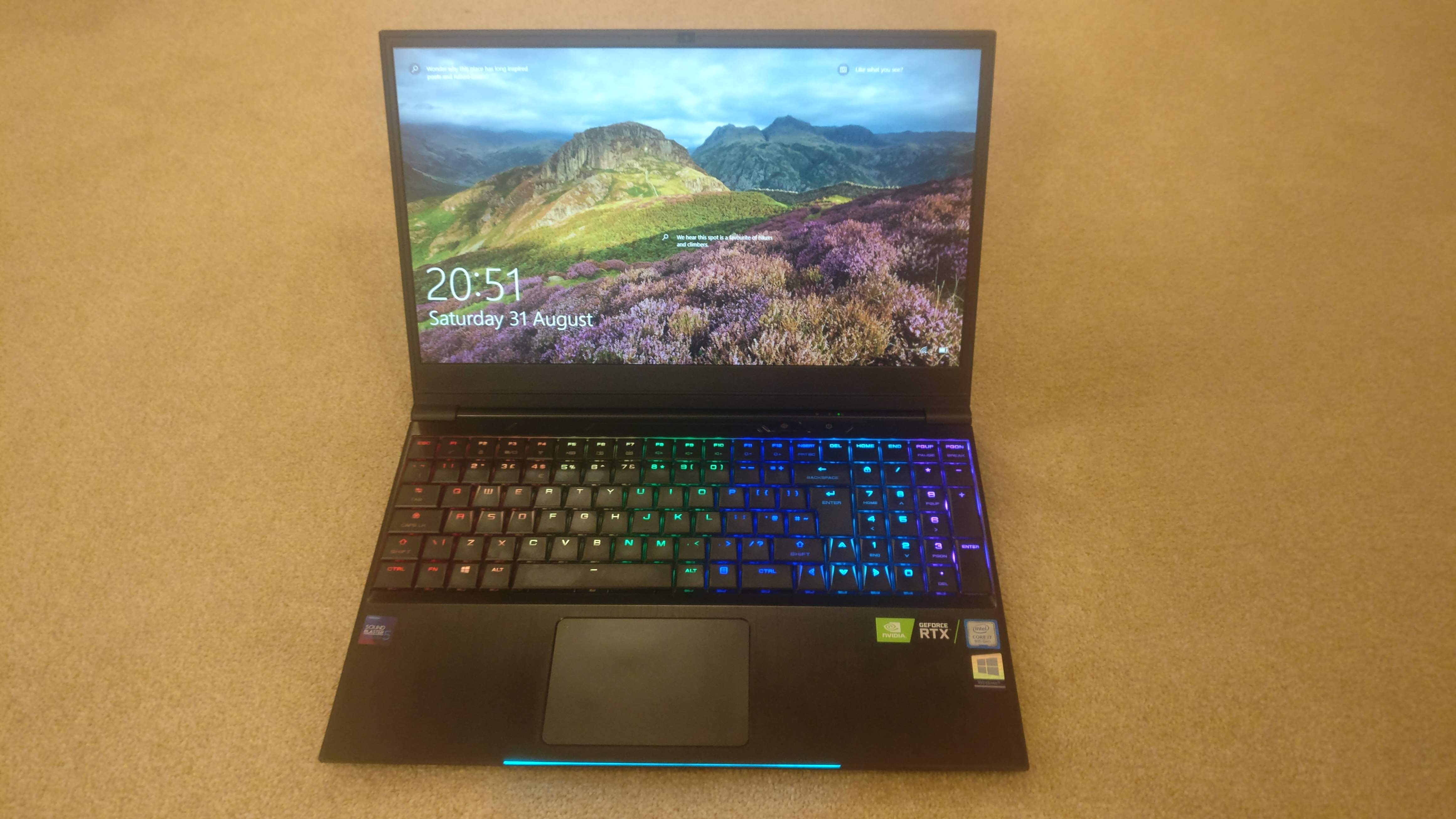 Metal keyboard surround and top monitor case gives the laptop a sturdy feel, if either of these had been plastic i don't think the laptop would have felt as sturdy and i'd have worried about the screen warping when opening and closing. However nice solid feel and the screen doesn't bend but i'd recommend closing with a bit of care regardless.

The bezzle around the monitor is nice and small compared with my previous laptop, camera is nothing special but i'll rarely use that so no worries there (wasn't on my wish list).

Trackpad is nice to use with gesture support and multi touch, can activate and deactivate with a double tap in the top left which is a plus when using an external mouse or typing a lot.

Screen is a nice matte panel with zero backlight bleeding and no dead pixels, decided a 4k monitor wasn't really needed and would just put unneeded strain on the GPU, i'd much rather 1080p with games set to high graphics and the GPU not have to work overtime.

Underneath the laptop has really good ventilation, i'm actually impressed with the thought gone into this compared with other laptop manufacturers. My old Asus takes air flow in through the gap between the screen and keyboard and blows it out through the bottom :/ so trying to cool that with a laptop cooling pad was almost pointless. The Recoil III takes airflow in through the bottom and throws it out through the sides and back, which works perfectly with a decent laptop cooling pad. I'd recommend a cooling pad slightly bigger than the laptop so it can push hot air away from the exit vents to really help. 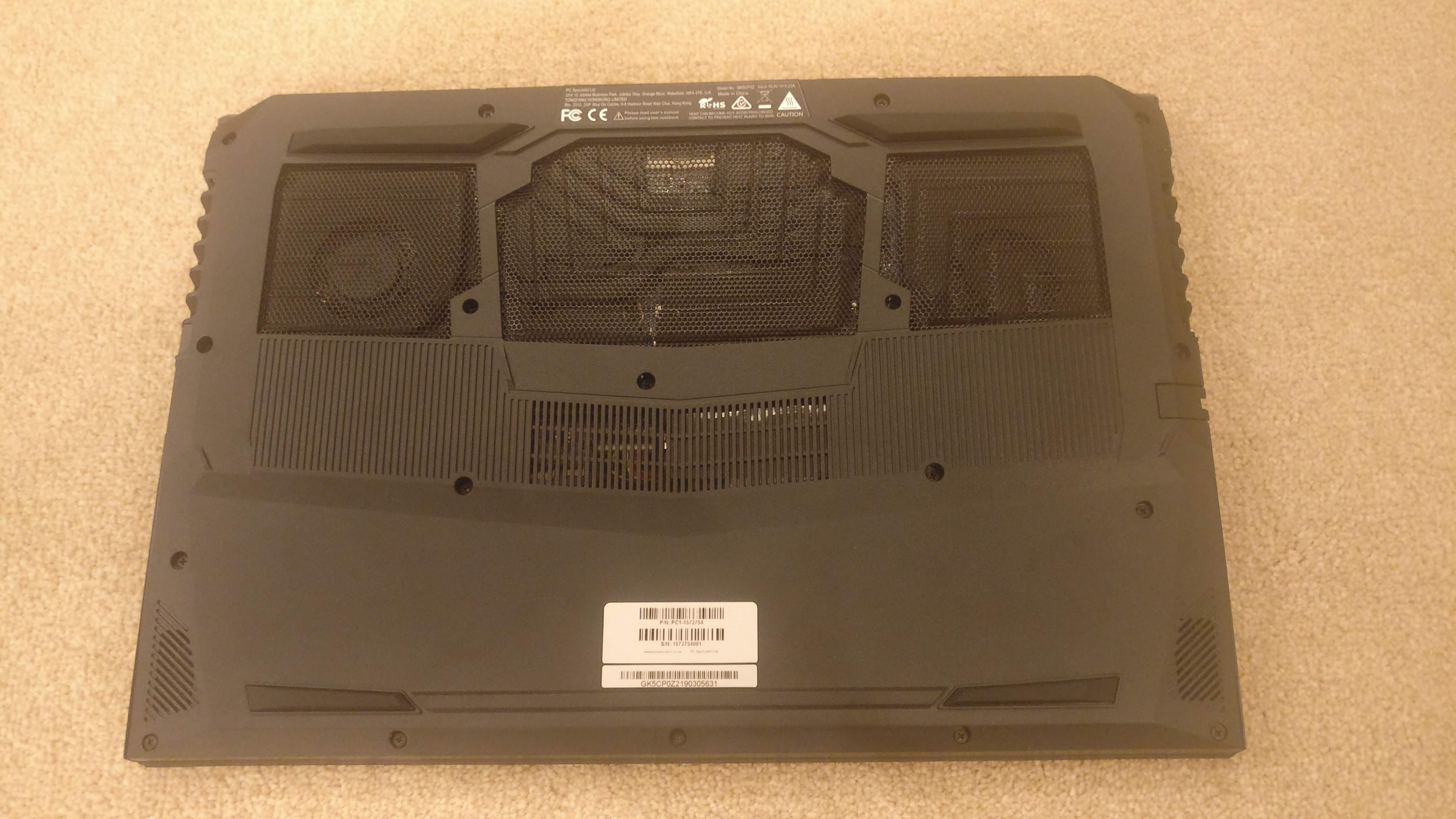 This model does get very warm if put under strain from gaming, as mentioned in other reviews the WASD area doesn't heat up too much, however the back panel near the screen and turbofan / power button does get very hot. The middle to right hand side of the keyboard does get warm but nothing like the back strip. Using a decent laptop cooler drastically helps with this. Personally from how thin and portable this powerhouse is, i'm impressed it keeps the heat down as much as it does.

The charging jack is located at the back almost centrally which is much nicer than the Asus having the jack on the left hand side. I spend a bit of time on the sofa at home playing / programming and the multi socket is on my right, so i no longer have a charging able draped across my legs/feet! (its the small things sometimes).

Also on the back are the two mini display ports and HDMI which keep them nicely out of sight when used as a desktop replacement. Having tones of cables out of both sides always looks a bit of an eye sore otherwise. 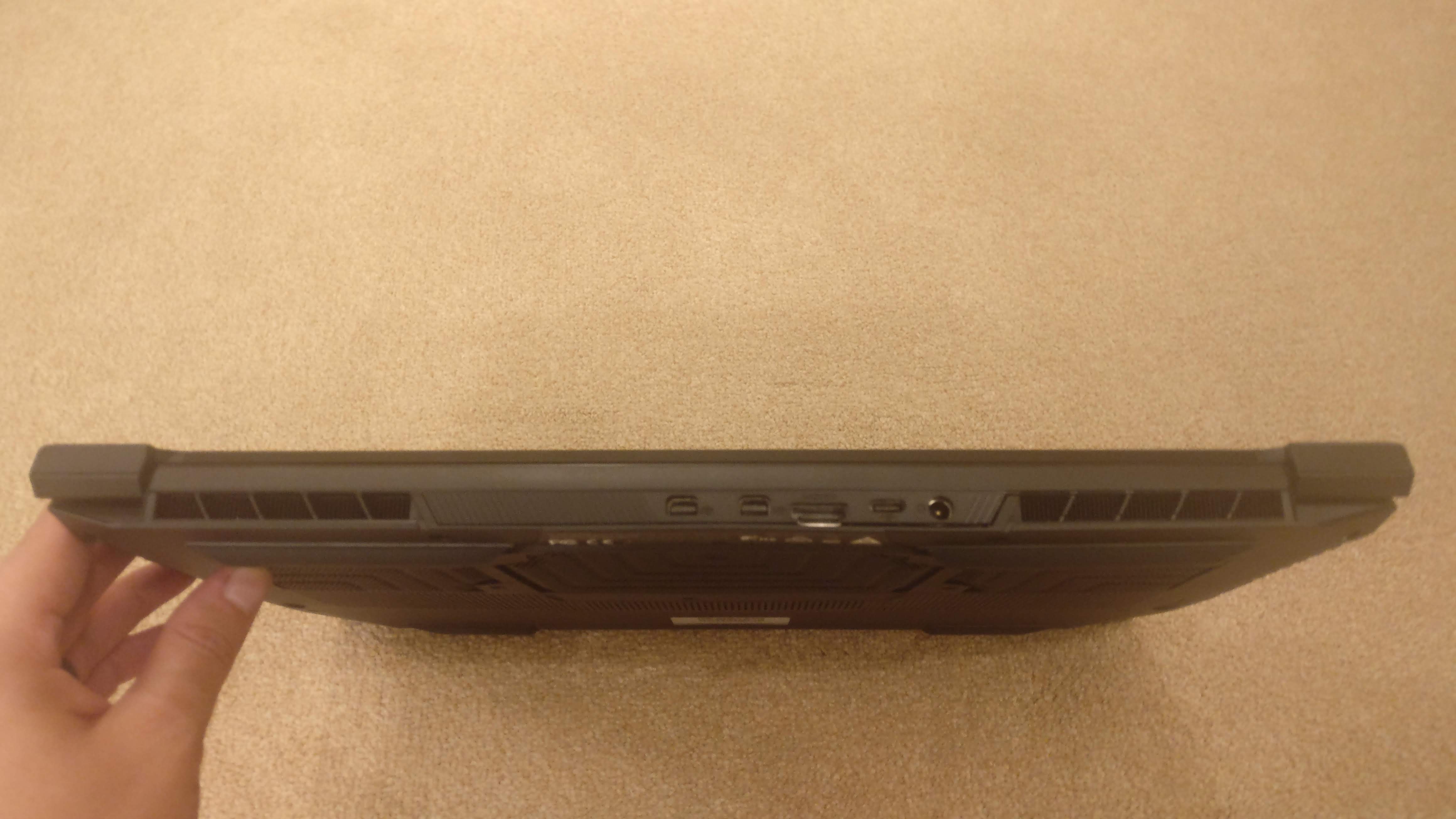 The recoil also supports 3 hard drive slots:
- Standard 2.5" SATA 3 - i'll either use this as a shared storage drive between my operating systems or as a test OS or even a hypervisor for virtual servers
- M.2 SATA - I ordered a 128GB M.2 for this slot, had to keep the costs down somewhere so this will need upgrading at a future date.
- M.2 PCIe NVMe - Most likely going to use this slot for my linux machine will need to get a decent NVMe drive which can give 1500MB/s read/writes compared to the standard SATA M.2s which give around 500MB/s from memory 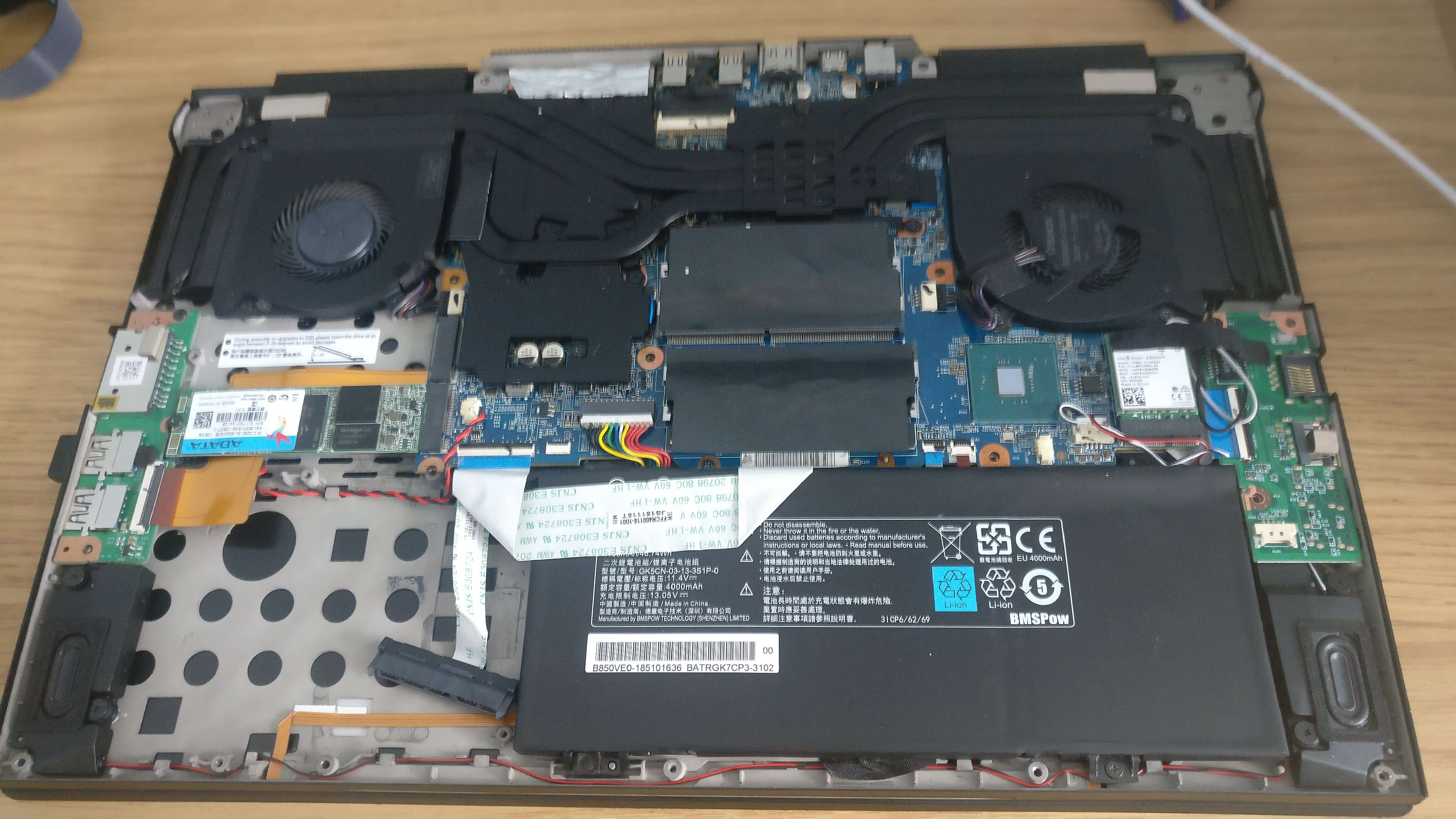 May have been cheeky and carefully installed an NVMe today, however did have to look through my 10 year box of screws for a spare like for like M.2 holding screw and there wasn't one with either the drive or case, and those are extremely small screws! Found one exactly the same dimensions and thread length luckily 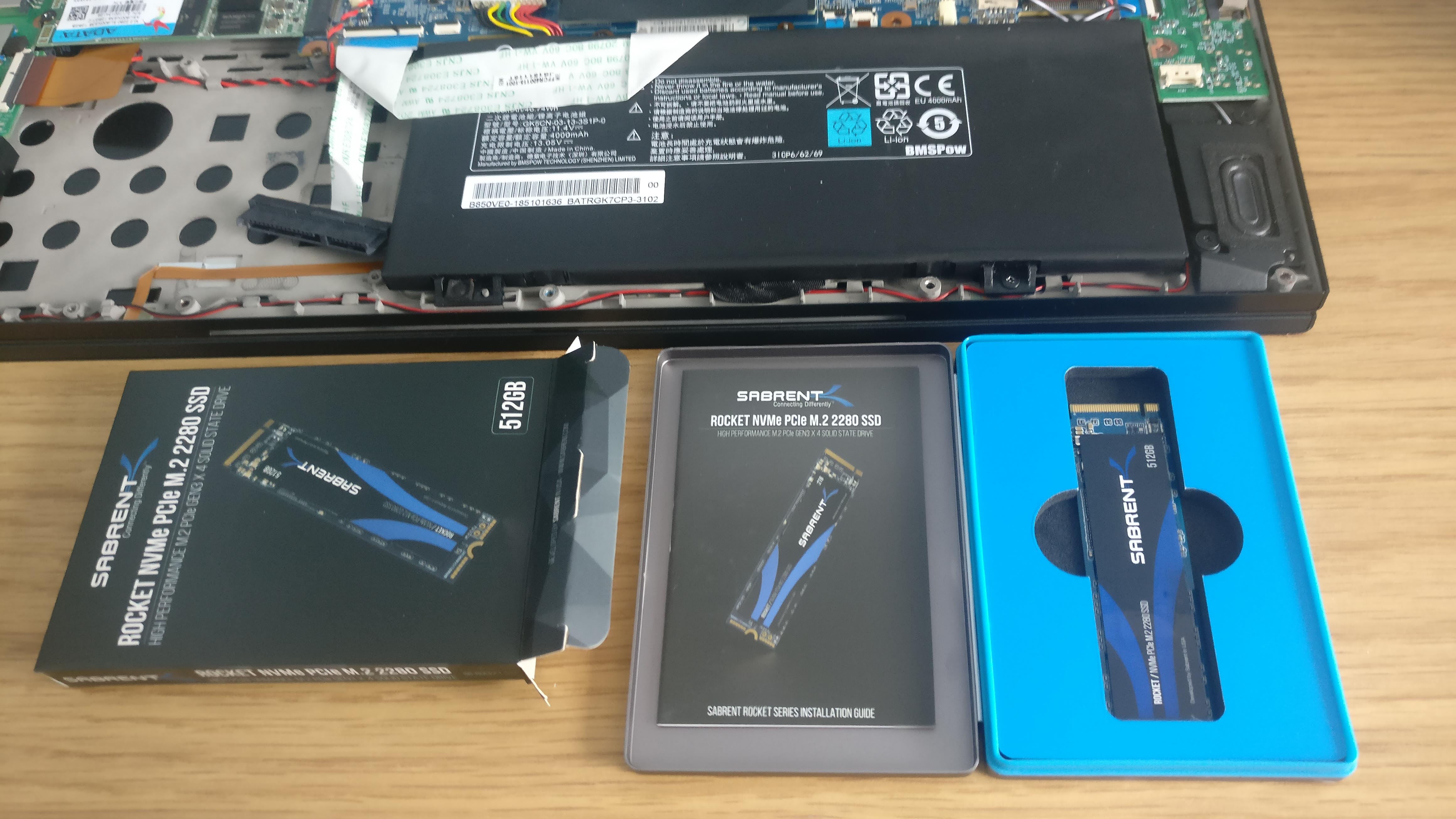 I also chose the upgraded the WiFi card to a killer card, very impressed with the local network speeds i'm getting on the 5GHz band, seems nice and stable for couch gaming still use the ethernet when at the desk.

After firing up EVE Online for the first time I looked at the FPS and was getting over 200, starting up a secondary character at full graphics and 200 FPS the GPU started buzzing. Looking at those stats ... no wonder! After setting Interval to 2 (basically using vsync) the FPS counter dropped down to 70 FPS consistently and very rarely dropping below 60. If i want to use windowed mode instead of fullscreen the only vsync options are Interval 1 which gives around 144 FPS per client, so to prevent overloading the GPU i'd have to drop some of the graphics settings down slightly, however very impressed with the performance so far (Nvidia 2060).

Overall this is a huge upgrade from my previous laptop and i'm very impressed at the build, components and performance. Also thanks to the guys at PC Specialist for great customer service and outstanding build/delivery times.
Last edited: Dec 30, 2019
K

Full Specs from the order page: