So what is my experience with PC Specialist they asked.

As background, I worked as a PC hardware and software technician and tutor. I have built my own desktop systems. Now I am retired.
Recently we wanted to reorganise our living room - my wife likes clean lines (no clutter!). So we decided to do away with the computer desk and invest in a laptop instead.

For me that meant one which could handle my Flight Simulator with all it's addons. Also I do some photo and video editing along with DTP.
I have both built PCs and purchased ready built systems so I had a reasonable idea of what I wanted. I checked out the big names and then stumbled upon PC Specialist.

Choosing the build components was very easy and at the end there was a helpful suggestion regarding the HDD I had selected. The price was good as well.
The system was delivered in a week. Perhaps one word of caution, PCSpecialist is the clue. Although the systems are ready built for you, you may have some work to do, these are more 'specialist' systems than generic ones.

My 'work' came in the form of a BSOD (Blue Screen Of Death!). On the first day of setting up, the dreaded blue screen appeared and the system rebooted. The shock was such that I did not notice the error code. I thought that overheating may be the problem but the laptop was warm not hot to the touch. So I continued installing my applications. I also downloaded and ran Fur Mark which is a program to put the graphics card under pressure and watched the CPU and GPU temperatures. All was very cool (literally)!

The next day came two more BSODs while I was setting up an office suite. This time I noticed the error referred to Video_TDR_failure. A fault with the graphics card? A search in the internet showed that this error is not an uncommon problem in Windows 10. Still it is disconcerting! There were several posts on the PCSpecialist forums on this subject as well.

I tried to replace the video card drivers but on running the setup from the Nvida site was presented with the message that the previous installation would not permit a driver update this way. I found that by installing GeForce Experience though I could install new drivers.

All seemed well until another BSOD occured, and then a couple more .... was I going to have to return the laptop with a fault?
All the while Windows 10 was continuing to add more updates.
I continued adding my programs to the laptop....

After 10 days or so the system settled. I have had no more BSODs and the Flight Simulator is running well. So hopefully all is well.

So what is my opinion of PCSpecialist?

The ordering process and advice was good with more available on the forums if wanted.
I was kept informed via email of the build process and dispatch.
Around a week after ordering I had the laptop delivered.
Setting up has not been just the out-of-the-box process that some systems may be. The errors mentioned took time to research. I think the initial installation drivers were a bit out of date and Windows 10 needed more time to update and settle down.

The end result has been a powerful, surprisingly cool laptop which is performing well after 2 weeks of use.

So be prepared to do some work, but the results can be pleasing.

Would I use PC Specialist again? A definite yes! 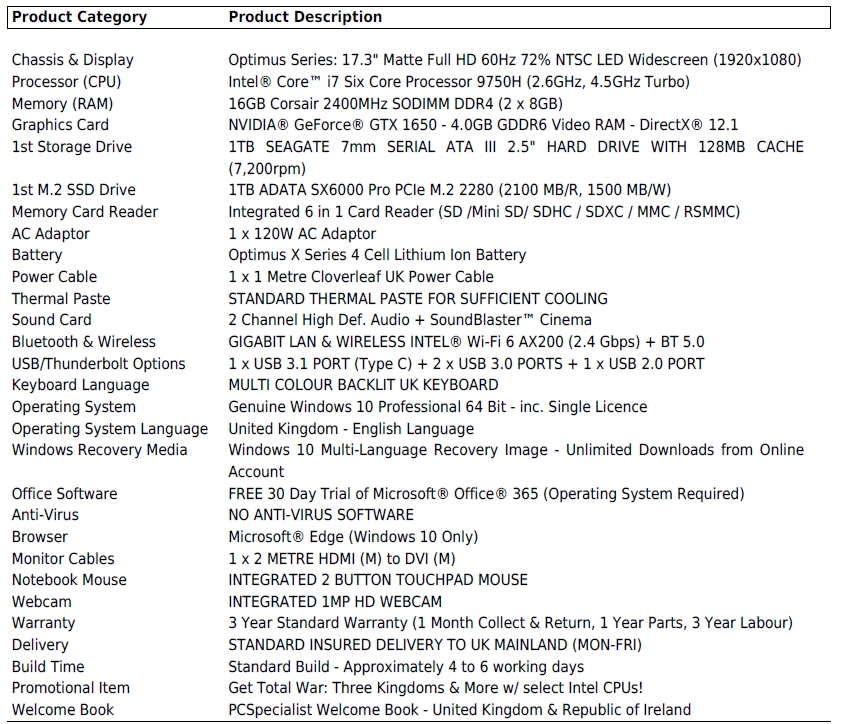 Have you reported the issues to PCS?

It may well have been a driver issue and perhaps an update that has happened in the intervening period is what made the problems stop, but since you're not having the error and therefore can't say for sure what caused it, I'd certainly log the issue with them. If you have a problem down the line, logging it may also help in terms of claiming on the warranty.
G

Thanks Oussebon, I have posted a report.

The forums aren't an official support channel, so I'd suggest dropping them an email