Vortex IX [4K / 9750H / RTX2070]: Discrete Mode = Dead Screen | PCSPECIALIST
Menu
Log in
Register
You are using an out of date browser. It may not display this or other websites correctly.
You should upgrade or use an alternative browser.

I just received a shiny-new Vortex IX. Unfortunately, there's one small problem: When switching from 'MSHybrid' to 'Discrete', the laptop monitor does not energise.

Here's a summary of what I sent to the PCS tech support:

As far as I can see there is no option in the BIOS to switch between the iGPU hybrid output and dGPU output, but it can be switched from the Clevo Control Center. When I switch to discrete mode using the CCC and reboot the machine, the laptop screen remains "off". The HDMI port works (pretty much as expected in dGPU mode) and I was able to salvage my machine back to a working state.

I've also had an issue (as also mentioned by @darbyjack on the forums) where the display will de-energise and re-energise and display a strange green-ish pattern. This happens for me when switching between resolutions E.G: 2160 and 1080 modes (in full-screen applications). Occasionally, the on-board monitor will not turn on again until the resolution is flipped back to 2160 [using Ctrl+Alt+Del] or I've closed and then re-opened the laptop lid.

When CCC is set to 'Discrete' mode, the on-board monitor is very much "alive" in terms of connectivity:

1) The NV Control Panel detects that the laptop monitor and external monitor are both connected. I can edit and manipulate the settings for both monitors independently.

3) The Intel Graphics Command Center also reports that both of the the displays are connected but, "Options are limited" due to their not being a display connected to an Intel GPU.

Regardless, I've switched back to MSHybrid mode, so I can use my laptop as a laptop again. I also did a DDU on the NVIDIA and Intel drivers and allowed Windows to re-install the driver-only packages; still no luck with dGPU mode.

I have updated to the latest DCH drivers from NV and Intel.

Does anyone have any suggestions before I RMA the laptop?

Moderator
What CPU do you have?
T

SpyderTracks said:
What CPU do you have?
Click to expand...

Hmm, I would RMA it, can’t think of why that wouldn’t let you switch.
D

I have not tried switching from MSHybrid to Discrete. What is MSHybrid? My laptop just arrived today from an RMA, will be able to try what you're doing tomorrow when I'm back.

Regarding the RMA (strange flickering and artifacting), PCSpecialist reported no faults and sent the laptop back home without any further action being taken.
Last edited: Jul 31, 2019
T

I've requested an RMA. It's just a bit unfortunate, we got off to a good start as well!

Well matey, your laptop has two GPUs inside of it (as you are probably aware). The GPU on your Intel CPU (iGPU) and your NVIDIA GPU (dGPU). The default mode for them to run in is, "Hybrid" - Which is why you see that option in your NV Control Panel to run programs on either, your Intel GPU or your NV GPU.

Thus, "Nvidia Optimus" / "Hybrid" technology allows you to utilise two GPUs at once. A low-power GPU running menial tasks [Desktop, web-browsing, etc.] and the discrete GPU doing the heavy lifting [Minecraft, NVencoding videos of your cats] when required. You can save battery and have performance!

Essentially, you're rendering graphics on your NV GPU and shunting it over the Intel GPU frame-buffer. The problem with this Hybrid solution lies wherein: As much as you are saving some power for an extended battery life, that Intel GPU is sucking up some of your package Wattage specification and is dually contributing towards that very tight TDP. In discrete mode you're pumping out the eye-candy directly to your monitor through the Nvidia frame-buffer - negating any form of potential performance hit and reducing the power used by the Intel SoC.

You'll notice that when gaming or running a 3D program, to any degree, under Hybrid mode, you will see something like this in Task Manager:

Discrete mode being offered as a maximum performance alternative. 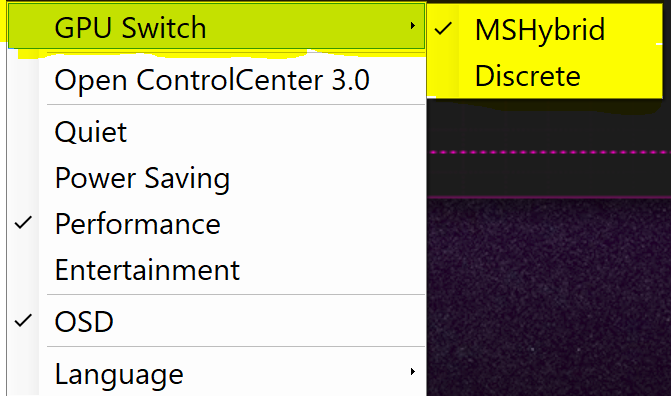 If you do change to Discrete and you encounter the same issue as me [a dead screen], you will need to plug in an external monitor. Period. Since you won't even be able to access the BIOS, or view POST, using the built-in monitor.

I had two occasions during my testing where my external monitor would also detect no signal when Windows had loaded. I had to do a DDU under Safe Mode and force the machine back into Hybrid when the OS loaded, then re-install the NV drivers.
Last edited: Aug 1, 2019
M

Hi, I've posted this elsewhere on here too but thought best to try and get your attention as there may be a simple solution here.

I was just looking at a forum for owners of the Clevo chassis the Vortex is based on as I'm considering buying it.

On the page I linked to someone from another reseller says that the OLED version only works in Optimus mode - I wonder if this might be the source of the flickering problem DarbyJack and TheNameIsJambo are experiencing.

Ah, I just switched to discrete and the monitor is dead. Can't even get signal on external monitor when Windows loads (but can view BIOS). How can I access safe mode now??
Last edited by a moderator: Aug 2, 2019
D

OK nevermind, switching to default settings in BIOS fixed the problem. So what, is Discrete not supported? I asked someone at PCS on the phone about this but didn't really understand what he was saying.

I didn't know about this MSHybrid thingy until now. I would also be interested to learn how to switch to Discrete mode successfully.
Last edited: Aug 2, 2019
M

It seems like the OLED version only works with Optimus enabled, if I've understood correctly

Laptops used to have Optimus. New ones have MSHybrid. Different tech but the idea is the same afaik.

I'm not at all familiar with these things, but afaik the dGPU is more or less passed through the iGPU under MSHybird. So when you set to discrete, you get the full NVCP options for monitors and limited/no options for Intel graphics control. Which makes sense to me...? The part that doesn't make sense is the bit where you get nothing on the laptop screen with Discrete...
You must log in or register to reply here.
Share:
Facebook Twitter Reddit Pinterest Tumblr WhatsApp Email Share Link
Top